The equal highest priced yearling by Hong Kong champion Akeed Mofeed (GB), Like That made it two wins from there starts when saluting at Sha Tin on Sunday. 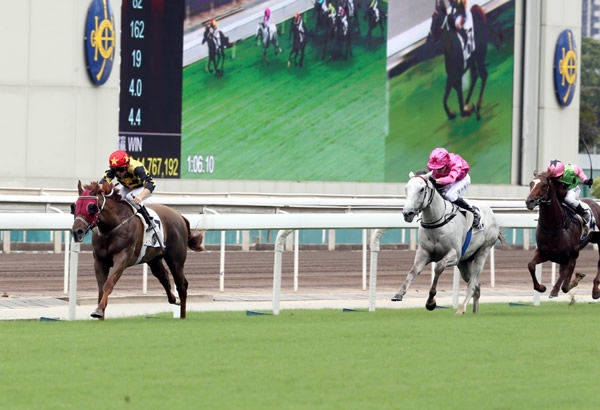 Above: Like That powers clear for an easy win – image HKJC

Trained by John Moore and ridden by Zac Purton, two year-old gelding Like That raced to an easy length and a half win in the griffin plate over 1200m.

“He’s not beaten too much, in my opinion, they’re probably Class 4 and Class 5 horses,” Moore said.

“But he’s showing a bit of talent, he’s doing what he has to do and each run has been better – we’ll put him into a Class 3 1200-metre race next time and see if he can cope with the rise but he’ll have his work cut out for him in Class 3.

“I’ll keep him at 1200 metres because he’s still not the finished product. Physically, he looks quite forward for a two-year-old but his heart and lungs need development so he’s a work in progress.”

Like That was a $200,000 Magic Millions Adelaide purchase for Gary Moore Racing from the Goldin Farms draft.

Like That was bred by Goldin Farms and is the third winner from Calemore, a half-sister by More Than Ready (USA) to Group I winner Lady of the Pines.

Calemore has been married to Akeed Mofeed and been to him for the past five seasons.

The champion son of Dubawi is now at Swettenham Stud and is priced this spring at $16,500.

You have successfully subscribed to the newsletter

There was an error while trying to send your request. Please try again.