Swettenham Stud’s shuttler Toronado (IRE) has been riding a wave of success of late and he enjoyed another successful day on Saturday with the progressive 3yo filly Mrs Beckham winning at Caulfield before another 3yo filly, Still A Star, became her sire’s first stakes-winner in Australia with a dominant performance in the  Ladbrokes Tasmanian Guineas (1600m) at Launceston.

Punters had the Guineas down as a two-horse race between the fillies Mystical Pursuit, a three-quarter sister-in-blood to Mystic Journey, and Still A Star.

While Mystical Pursuit was well back early, Brendon McCoull settled the Bill Ryan-trained Still A Star outside the leader Argyle Beach and those two fought the race out. Still A Star overpowered the Purrealist gelding to score by a half-length with the outsider of the field Mywordis (Wordsmith) three lengths away third.

Anthony Darmanin made a long run on Mystical Pursuit to try and put her into the race but she was cooked before the turn and battled into fifth place some five lengths from the winner.

Still A Star had rattled off three consecutive wins before being defeated by Mystical Pursuit at her most recent start when she came from well back.

“It was a small field tonight and, once she got outside the leader and settled, I was confident of winning,” McCoull told The Examiner.

Ryan said it was a great tactical ride.

“It was a brilliant ride – she always looked the winner,” he said.

“We’ll look to go to the Thousand Guineas next then she’ll tell us whether she wants to continue racing or needs a break.”

A $13,000 purchase by Monica Ryan out of the Alva Stud draft at the 2018 Magic Millions Tasmanian Yearling Sale, Still A Star advances her record to 4 wins, 5 seconds from 9 starts with earnings of $201,190. 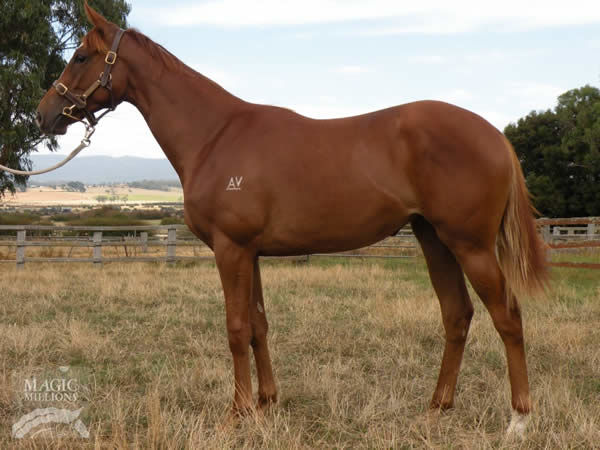 Still A Star as a yearling

Alva Stud will consign a Manhattan Rain half-sister to Still A Star at the upcoming Magic Millions Tasmanian Yearling Sale.

Their dam, the Brisbane winning Casino Prince mare Lita is a daughter of the top-class Stravinsky mare Royal Asscher the winner of the Group III MVRC Red Anchor Stakes, Listed VRC Ottawa Stakes and Listed MRC William Crockett Stakes and was third in the Magic Millions 2yo Classic.

Purchased by Alva Stud for $20,000 at the 2015 Inglis Australian Broodmare Sale, Lita missed to Alpine Eagle in 2018 and was covered by Spendthrift Farm’s Bolt D’Oro (USA) last spring.

You won’t find a Toronado (IRE) at the Magic Millions but Lime Country has a colt and a filly entered for the Inglis Classic while the son of High Chaparral (IRE) has 11 catalogued for the Inglis Premier.

Fiorente’s Beauty Legacy Makes Stunning Debut at Sha Tin Victoria hits gold as the flag is flown on day one at the Magic Millions Gold...
Scroll to top